Moritzburg is a Baroque castle in the municipality of Moritzburg in Saxony, about 13 km northwest of Dresden.

The original castle was built from 1542–1546 as a hunting lodge. Between 1661 and 1671 the chapel was added after designs by his architect Wolf Caspar von Klengels, a fine example of the early Baroque style. Between 1723 and 1733, Augustus II Strong had the castle largely remodelled as a pleasure seat, including a formal park, several ponds and a game preserve.

The displays of many areas within the castle are dedicated to the courtly art of formal hunting. The collection of red deer antlers is considered to be the largest in the world. In the Monströsensaal ("Monstrosity Room") is preserved famous 66-point antler. The Elector's apartments contain excellent examples of lacquer and splendid parade furniture, the silver furniture made in Augsburg in emulation of Louis XIV's silver furniture at Versailles, and Chinese, Japanese and Meissen porcelain. The castle is also famous for its sandstone decorations and stuccos.

In area of Schloss Moritzburg has been in 1973 filmed famous fairy-tale Tři oříšky pro Popelku ("Three Nuts for Cinderella"), made in Czechoslovak-German co-production, with charm of notable Czech actress Libuše Šafránková starring there like a pretty princess. This story belongs to attributes of Christmas time of Czech and German childern the same way like the Christmas tree.

Königstein Fortress (German: Festung Königstein), the "Saxon Bastille", is a mountaintop fortress near Dresden, in Saxon Switzerland, Germany, near the town of Königstein. The fortress, which for centuries was used as a state prison and which is still intact, is one of Saxony's foremost tourist attractions, with 700,000 visitors per year.

The first reference to a castle at Königstein is from 1241. To delimit the boundary running between Kingdom of Bohemia and the Bishopric of Meissen, Czech King Wenceslaus I established the castle which controlled the Elbe valley above Pirna. A castle since the mid-13th century originally belonged to the Kings of Bohemia, passing in 1408 to the Dukes of Saxony. Because Königstein Fortress was regarded as unconquerable, the Saxon monarchs retreated to it from Wittenberg and later Dresden during times of crisis and also deposited the state treasure and many works of art from the famous Zwinger here. The Königstein also became the state prison until 1922 for the most important prisoners.

Königstein was never taken, not even during World War II. In World War I the castle was used as a prisoner of war camp for French and Russian officers. For the same purpose it has been used also during World War II,; that time it served as prison British, French, Polish and other Allied officers.

Pillnitz is a city quarter in the east of Dresden, Germany, a rather long way from the inner city. The best known sight of this quarter is the Japanese-styled chateau. The park around the castle was founded in 1539. Saxonian king Augustus II the Strong passed the facilities as a gift to Anna Constantia of Brockdorff, one of his numerous women.

From 1720 the buildings were replaced by elaborate Baroque palaces designed by Matthäus Daniel Pöppelmann and Zacharias Longuelune. The construction continued until 1725, giving the facilities a kind of Chinese style, nevertheless Augustus soon lost interest in his new palace.

In the castle park there are, for example, an orangery and a famous camellia tree that maybe Carl Peter Thunberg brought from Kyoto to Kew Gardens in 1776. The tree planted in 1801 reaches a height of 8.6 m (28 ft) and in spring shows up to 35,000 blooms. The park features a lot of other unusual plants, a Chinese and an English pavilion as well as smaller museums about royalty and industrial life in Dresden.

Pillnitz is also a site of wine production. During the millennium flood of 2002 in Dresden, it was one of the most affected areas.

Moritzburg Cultural Landscape has become famous after 1973, when the Baroque castle was the festive backdrop for the popular Czech/German fairy-tale movie »Three Hazelnuts for Cinderella«.
Just a few minutes’ drive or a romantic walk away from the Moritzburg Baroque castle is located the Little Pheasant Castle, an enchanting Rococo palace. On just 12m square provides sufficient space for holding court en miniature and is hence also called »Paradise in a Nutshell«. This little hunting palace with its miniature port and lighthouse then formed the backdrop of glittering festivals celebrated by the Saxon nobility. The building was erected between 1770 and 1776 adopting chinoises’ forms on the project basis of architect was Johann Daniel Schade.
The castle is surrounded by a large lake. In the opposite site of park a maritime buildings and lighthouse were built to serve the electoral court and their guests in the 18th century as a backdrop when sailing across the lake in frigates or gondolas.
In our day, the Free State of Saxony owns the major part of the area and makes an effort to reconstruct the historical structures of the landscape park.
The restoration of the Little Pheasant Castle was completed in 2007.

I have changed my copter type and built DJI F-550 like my new "mobile and travel" holiday photo equipment. Having complete lift-off weight 2450g inclusive LiPo accumulator 6500mAh, GoPro camera, gimbal and video-sender, it can hover about 12 minutes and seems be perfect mobile photo equipment for my holiday trips. DJI Flame Wheal F-550 is equipped by built-in flight stabilization and GPS control, what makes the flight comfort incomparable with Walkera UFOs.

More pictures inclusive their locations on my Panoramio account or using application GoogleEarth. 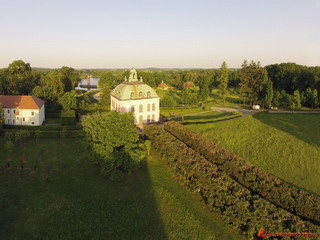